Skip to content
In Thuman, one oft he largest villages in the region – it consists of about 400 households and is situated on the mountain slope opposite of Lingling and Pelko- a school leading up to 8 th grade has reopened in 2017, which is currently attended by 130 children. So we receive very few requests from there. However it is a state-controlled school and the standard of teaching is far behind that of Gosainkunda English Boarding School in Syabrubesi.
The siblings Sara (7 years) and Rajan (5 years) come from the small village of Karabari, North of Briddhim. Their mother Phurbo Dolma is rasinig the children on her own since her husband has left the family. Phurbo doesn’t have steady work. Whenever there is an opportunity she labors on fields in the area but it does not suffice for providing the children with what is needed, let alone financing a school education.
Rajan who just turned 5 has found a sponsorship from October 2022 and will be enrolled in December. Thanks to sponsorship Sara could be enrolled at Gosainkunda English Boarding School already in December of 2020. But unfortunately in springtime she has lost part of this support, thus is in need of another partial sponsorship, so she can continue school. It would be quite sad if Rajan will be enrolled soon and Sara would have to leave it again because of missing support.
We are also in search of sponsors for these families in Briddhim:
Oftentimes especially families are in need of help as providing for a multi-member family is more difficult than only supporting oneself: for parents or single parents raising their children or even siblings, as well as taking care of elderly parents – on but a meager income or none – it is nearly impossible to supply a good basic support. The same goes for elderly people who receive little or no support in terms of retirement payments and have to keep laboring in the fields at an advanced age or in spite of physical impairments in order to support themselves.
With this task however we would like to assist the following families and elderly people: 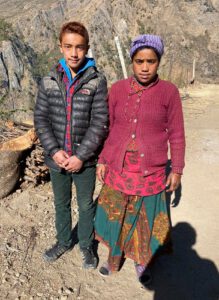 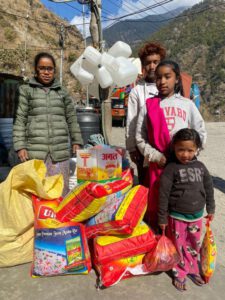 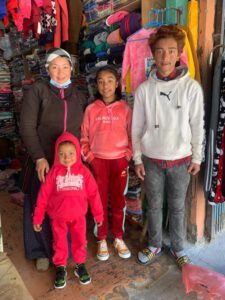 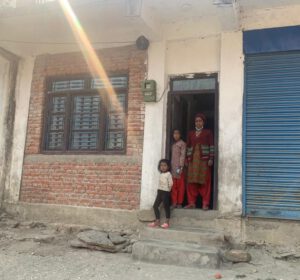 The three siblings Behban (16 years), Romi (13 years) und Jesica (5 years) have been living in Kirabari, a small village near Mentok Gan, along with their mother Manmaya (40 years). The family got along reasonably well and the eldest, Behba, could even attend a state school in Chilme, a neighboring village. Three years ago however a tragic accident occurred, in the course of which a man fell down a mountain slope and died. Manmayas husband Hinbadur (35 years) tried to help him but was instead accused of killing him. He was wrongly convicted, sentenced to 20 years of imprisonment and still has to serve 16 years. For the family this was a heavy blow as the father was the main provider. Behban was forced to leave school at only 12 years in order to try to support his mother, himself and his siblings by doing hard work in road building.
That’s why we had included the children in our school sponsorship program and all three could be enrolled at Gosainkunda English Boarding School in Syabrubesi in April 2021. An additional problem makes the life of the family quite difficult, though. Since they belong to the caste of Kami it is nearly impossible for them to find work and the social exclusion takes many forms. The children are not even eligible to stay at the boarding school but are only allowed to attend day school. The school management would gladly accommodate them but other children’s parents were objecting. Thus the family had to move to Syabrubesi, which again means higher costs for rent.
Since then we were able to support the family well thanks to extra donations of their sponsors to cover not only school fees but also housing and food supplies. Manmaya herself managed to find irregular work which only brings in little though. Recently Romi has lost one of her partial sponsorships and so the family is in need of additional support.
Please support Manmaya and her children with a soponsorship of 25 Euros to cover life expenses.